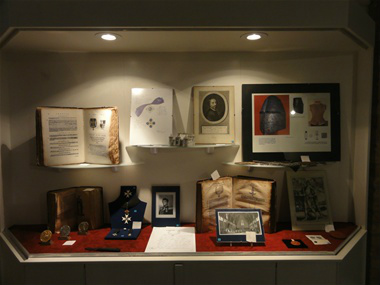 The Sovereign Order of St. Jacob in Holland and the Museum Oud Rijnsburg.

The one thousand year old village of Rijnsburg is situated in the triangle of Leiden, Katwijk Noordwijk and has about 15 thousand inhabitants. In the centre of the village you can find the remains of the old Abbey, built in the eleventh century and now called the Great or St. Laurentius church and a small intimate museum. (Photo) In this museum, there are permanent  exhibitions of the middle ages.

These exhibitions are on show in display cases and  illustrate the history of the Sovereign Order of St. Jacob in Holland. (Photo)

Pictures show Count Floris V, who, along with other members of this noble family, will always be connected with the village of  Rijnsburg. (Photo)

Some years ago, questions arose concerning the remains of Floris V and his family, but the general opinion is that the graves of the family were in the Chancel of the Abbey. In 1975 a hardstone mausoleum was constructed for the remains of the family of the House of Holland and they were buried there in small vacuum-sealed coffins and given a silver commemorative plaque. (Photo)

Rijnsburg decided to honour Floris V and so in 2001 a statue was unveiled  where the second tower of the Abbey was once situated, (Photo). An outline of the history of Floris V is inscribed on the base of this monument.

The ruins of the Abbey are a small part of the original building and a model shows the glorious monument as it was in olden days. The Abbey was destroyed by the inhabitants of Rijnsburg during the Siege of Leiden to prevent the Spaniards from setting up camp there.

The display case of  Floris V shows important episodes of the Order, like the twelve noblemen who were knighted in the Ridderzaal in The Hague; the shell necklace; the book by Thomas de Rouck including the Charter of Foundation; some relics of the  knights; important books about the Order; and the concept of a new Order in 1815 for King William I.

Floris V and his importance in the history of Holland and Zeeland. It  will give you an idea about knighthood and  ideals. It might inspire you to do more historical research and who knws what information you may find. Such inspiration and debate will keep Dutch history alive, not only for historians but also for the younger generation.

Besides the historical monuments, the museum has a very large collection of important books in its library.